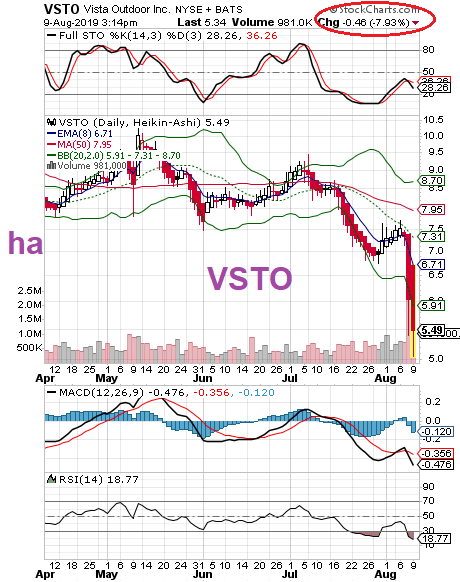 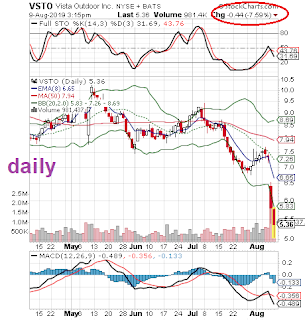 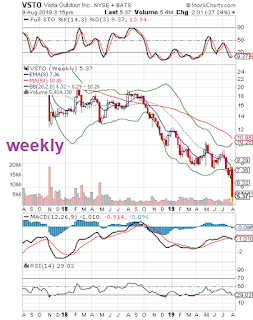 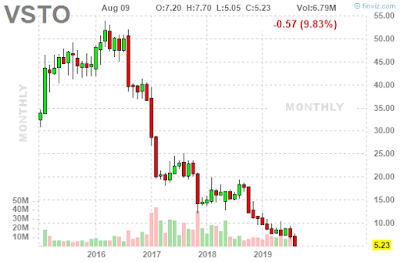 (Bloomberg) -- Vista Outdoor Inc. shares plunged 24% to a record low Thursday after the ammunition, long guns and related products manufacturer posted first-quarter results that missed expectations and cut its year forecast amid “unprecedented challenges.”
Management told investors it has now completed the first phase its turnaround plan, but that it continued to see “softness and challenges” in the markets it serves.
The quarterly earnings miss and the below-Street forecast cut for the year “signal continued difficulties, particularly at the shooting sports segment,” Cowen analyst Gautam Khanna wrote in a note ahead of the 9am conference call. Shooting sports is the largest segment by revenue contribution, according to Bloomberg data.
Shares are down more than 80% since their first day of trading in February 2015, when the company was spun off from Alliant Techsystems Inc.
Shooting sports wasn’t the only area of concern, however. Sales for the outdoor products group fell 7%, excluding the divested eyewear business, according to the analyst, who has a hold-equivalent rating on the shares. Segment results were hurt by soft hunting and shooting accessories markets and unfavorable weather conditions, he said, noting that sales in all product areas declined, including in: hunt and shoot (-7.5%), action sports (-5.3%), and outdoor recreation (-7.8%).
Vista’s full-year fiscal 2020 forecasts call for sales in a range of $1.79 billion to $1.89 billion, down from its prior view $1.94 billion to $2.03 billion. The updated sales target reflects the sale of its Savage Arms firearms brand, which was sold last month. Management also updated its earnings target to 10 to 25 cents per share, compared to its prior view of 28 to 38 cents. Khanna noted that proceeds from the Savage sale of around $170 million were less than originally expected.
Posted by Eva S at 3:14 PM